Instagram may finally let IGTV video makers earn money 18 months after launching the longer-form content hub. Instagram confirms to TechCrunch that it has internally prototyped an Instagram Partner Program that would let creators earn money by showing advertisements along with their videos. By giving creators a sustainable and hands-off way to generate earnings from IGTV, they might be inspired to bring more and higher quality content to the destination.

The program could potentially work similarly to Facebook Watch, where video producers earn a 55% cut of revenue from “Ad Breaks” inserted into the middle of their content. There’s no word on what the revenue split would be for IGTV, but since Facebook tends to run all its ads across all its apps via the same buying interfaces, it might stick with the 55% approach that lets its say creators get the majority of cash earned.

Previously, Instagram only worked with a limited set of celebrities, paying “to offset small production costs” for IGTV content Bloomberg reported, but not offering a way to earn a profit. That left creators to look to sponsored content or product placement to generate cash, or to try to push their followers to platforms like YouTube where they could earn a reliable cut of ads.

A lack of monetization may have contributed to the absence of great content on IGTV. Many of the videos on the Popular page are low-grade rips of YouTube content or TV, or are clickbaity teasers. That in turn has led to mediocre view counts, only 7 million of Instagram’s billion-plus users downloading the standalone IGTV app, and Instagram dropping the homescreen button for opening IGTV.

That’s all disappointing considering TIkTok is blowing up on the back of more purposeful, storyboarded mobile video entertainment. Instagram has been looking at other ways to boost the quality of content users see, including today’s launch unfollow suggestions.

Instagram drops IGTV button, but only 1% downloaded the app

But today, reverse engineering master and perennial TechCrunch tipster Jane Manchun Wong tipped us off to the IGTV monetization prototype she dug out of the code of Instagram’s Android app. She tells TechCrunch she first saw signs of the program a week and ago and was then able to generate screenshots of the unreleased feature. It shows an “Instagram Partner Program” with “Monetization Tools”. This seems to be different from the old “Partner Program” for business tool developers.

Users who are deemed “Eligible” according to criteria we don’t have info about could choose to “Monetize Your IGTV Videos”. The screen explains that “You can earn money by runing short ads on your IGTV videos. When you monetize on IGTV, you agree to follow the Partner Program Monetization Policies.” 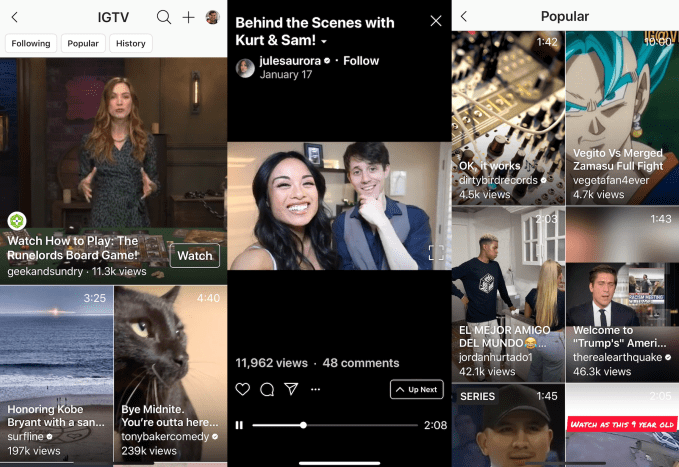 It’s not clear IGTV’s monetization policies would be different, but on Facebook, they require that users:

Instagram confirmed to TechCrunch the authenticity of the prototype it’s been working on and provided the following statement (that it later tweeted) “We continue to explore ways to help creators monetize with IGTV. We don’t have more details to share now, but we will as they develop further.”

Given the company is confirming this as a prototype rather than a feature being beta tested, there are no public mentions, and that there’s no Instagram Help Center information published about it, Instagram might not be testing the program externally yet. There’s still a chance Instagram could change directions and never launch the monetization program or alter it entirely before any eventual launch.

It’s no secret that we’ve been exploring this. We focused first on making sure the product had legs — else there would be little to monetize in the first place. IGTV is still in its early days, but it’s growing and so we’re exploring more ways to make it sustainable for creators.

Mosseri’s argument is that monetization hadn’t started sooner because Instagram wanted to ensure there was enough content to monetize. But Instagram had the money and scale to experiment much sooner, and could have attracted that content to monetize by dangling payment.

IGTV has improved with time as more influencers and publishers get the hang of vertical mid-length video. However, there remains a fair amount of low-quality, unoriginal, overly captioned, meme-style videos promoted on its “Popular” page, at least for me. Few come to its defense.]

It’s no secret that we’ve been exploring this. We focused first on making sure the product had legs — else there would be little to monetize in the first place. IGTV is still in its early days, but it’s growing and so we’re exploring more ways to make it sustainable for creators.

Creator monetization has been a slow-going evolution on many of the major social networks. While YouTube was early to the space with ads, it as well as Twitter, Facebook, and Snapchat are now testing an array of ways for influencers to earn money. Those include ads splits, subscriptions to exclusive content, tipping, connections to brands for sponsorship, merchandise sales, and more.

Bloomberg’s Sarah Frier and Nico Grant reported this week that Instagram brought in $20 billion in revenue during 2019. It gets to keep that revenue since it currently doesn’t split any with creators. That contrasts with YouTube, which says it took in $15.1 billion in 2019 revenue this week in the first time it’s revealed the stat, though it has to pay out a substantial portion to creators. With Instagram now running ads in feed, Explore, and Stories, only IGTV and Direct remain as major surfaces lacking ads.

Social apps are wising up that if they want to keep their creators from straying to competitors and bringing fans with them, they need to offer ways for people to turn their passion for creating content into a profession. IGTV spent a year and a half trying to get video makers to volunteer for free, and the result wasn’t entertaining enough. Now Instagram seems ready to share the proceeds if they can bring in viewers together.

ZTE is being investigated over possible bribery

Is EV charging the next gig for the gig economy? SparkCharge thinks so

Hackers release a new jailbreak tool for almost every iPhone

TikTok calls in outside help with content moderation in Europe