Google is launching a major update to its G Suite productivity tools today that will see a deep integration of Gmail, Chat, Meet and Rooms on the web and on mobile, as well as other tools like Calendar, Docs, Sheets and Slides. This integration will become available in the G Suite early adopter program, with a wider roll-out coming at a later time.

The G Suite team has been working on this project for about a year, though it fast-tracked the Gmail/Meet integration, which was originally scheduled to be part of today’s release, as part of its response to the COVID-19 pandemic.

At the core of today’s update is the idea that we’re all constantly switching between different modes of communication, be that email, chat, voice or video. So with this update, the company is bringing all of this together, with Gmail being the focal point for the time being, given that this is where most users already find themselves for hours on end anyway.

Google is branding this initiative as a ‘better home for work’ and in practice, it means that you’ll not just see deeper integrations between products, like a fill calendaring and file management experience in Gmail, but also the ability to have a video chat open on one side of the window while collaboratively editing a document in real-time on the other.

According to G Suite VP and GM Javier Soltero, the overall idea here is not just to bring all of these tools closer together to reduce the task-switching that users have to do. 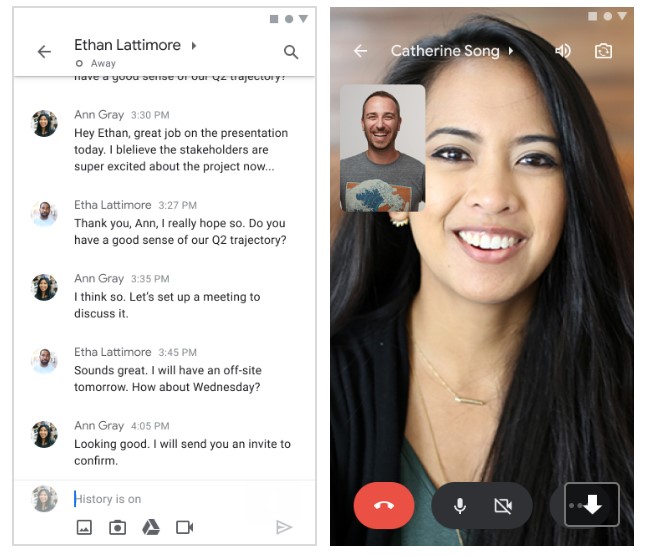 “We’re announcing something we’ve been working on since a little bit before I even joined Google last year: a new integrated workspace designed to bring together all the core components of communication and collaboration into a single surface that is not just about bringing these ingredients into the same pane of glass, but also realizes something that’s greater than the sum of its parts,” he told me ahead of today’s announcement. “The degree of integration across the different modes of communication, specifically email, chat, and video calling and voice video calling along with our existing physical existing strength in collaboration.”

Just like on the web, Google also revealed some of its plans when it first announced its latest major update to Gmail for mobile in May, with its Meet integration in the form of a new bar at the bottom of the screen for moving between Mail and Meet. With this, it’s expanding this to include native Chat and Rooms support as well. Soltero noted that Google things of these four products as the “four pillars of the integrated workspace.” Having them all integrated into a single app means you can manage the notification behavior of all of them in a single place, for example, and without the often cumbersome task-switching experience on mobile. 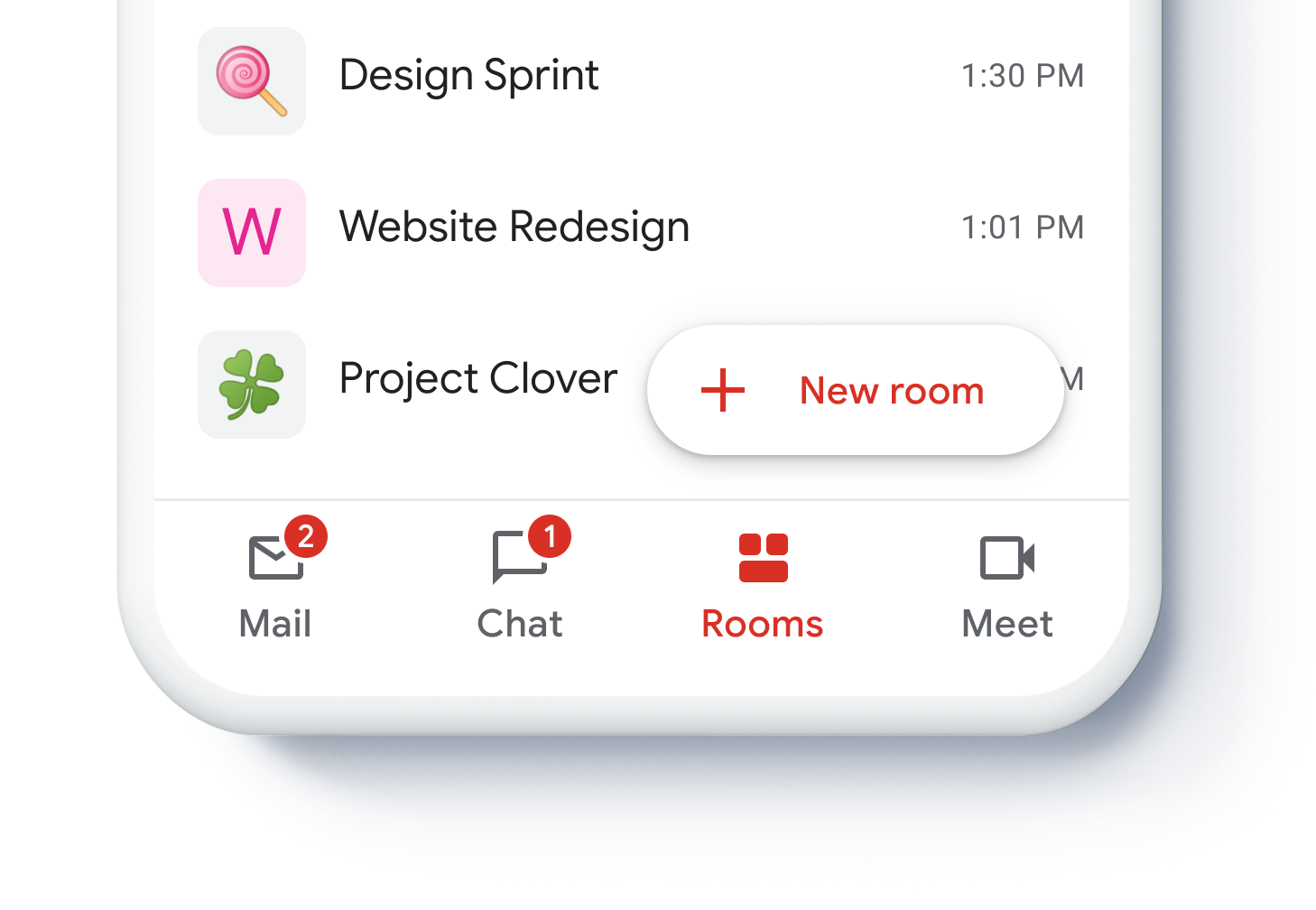 For now, these updates are specific to G Suite, though similar to Google’s work around bringing Meet to consumers, the company plans to bring this workspace experience to consumers as well, but what exactly that will look like still remains to be seen. “Right now we’re really focused. The people who urgently need this are those involved in productivity scenarios. This idea of ‘the new home for work’ is much more about collaboration that is specific to professional settings, productivity and workplace settings,” Soltero said.

But there is more…

Google is also announcing a few other feature updates to its G Suite line today. Chat rooms, for example, are now getting shared files and tasks, with the ability to assign tasks and to invite users from outside your company into rooms. These rooms now also let you have chats open on one side and edit a document on the other, all without switching to a completely different web app.

Also new is the ability in Gmail to search not just for emails but also chats, as well as new tools to pin important rooms and new ‘do not disturb’ and ‘out of office’ settings.

One nifty new feature of these new integrated workspaces is that Google is also working with some of its partners to bring their apps into the experience. The company specifically mentions DocuSign, Salesforce and Trello. These companies already offer some deep Gmail integrations, including integrations with the Gmail sidebar, so we’ll likely see this list expand over time.

Meet itself, too, is getting some updates in the coming weeks with ‘knocking controls’ to make sure that once you throw somebody out of a meeting, that person can’t come back, and safety locks that help meeting hosts decide who can chat or present in a meeting. 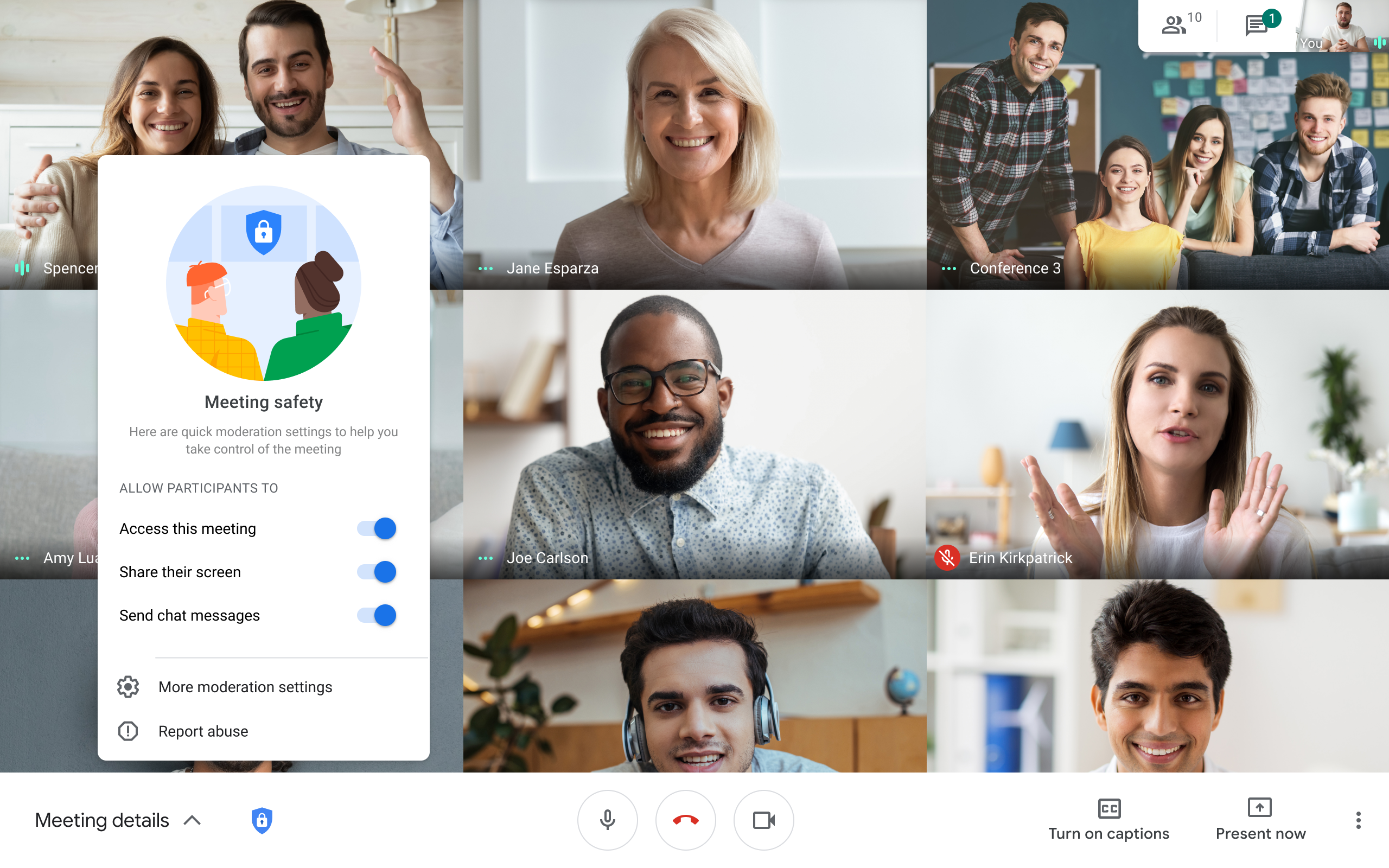 Google Meet shows up in Gmail inboxes, a few years too late

Contentful raises $80M Series E round for its headless CMS

Is EV charging the next gig for the gig economy? SparkCharge thinks so

Hackers release a new jailbreak tool for almost every iPhone

TikTok calls in outside help with content moderation in Europe